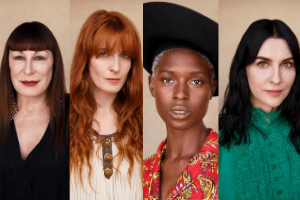 Director and actor Anjelica Huston, singer songwriter Florence Welch, actor and model Jodie Turner-Smith, and designer Susie Cave will star in an upcoming campaign shot at La Scarzuola in Italy. The campaign will be directed by photographer and director Floria Sigismondi and feature an exploration of imagination and identity, the brand says.

Campaign details will be announced in the coming weeks.