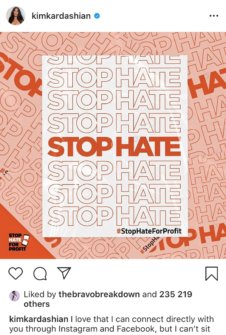 Social-media personality Kim Kardashian West is to temporarily freeze her Instagram and Facebook accounts on Wednesday, as part of the Stop Hate for Profit campaign, according to West’s social-media accounts.

A handful of celebrities are also taking part in the day-long blackout. Stop Hate for Profit is an ongoing campaign aimed at holding social-media companies accountable for hate on their platforms, according to the organization’s website.The activist group says it has the support of 1,200 business and non-profits.

Beginning Monday, the organization launched a Week of Action, which includes a 24-hour Instagram “freeze” on Wednesday.

Stop Hate for Profit was one of the activist organizations that was responsible for companies pulling ads from Facebook earlier this summer, including Unilever and The Body Shop, among others, concerning lack of regulation of hate content on its social-media platforms.

Other digital
Heard on the net
Most read