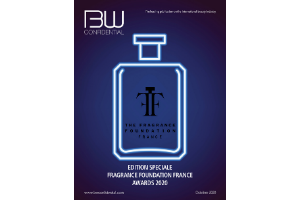 Lancôme (L’Oréal) walked away with four prizes at this year’s Fragrance Foundation France Awards. The 28th edition, which recognize perfume excellence, was held in a special virtual edition across the foundation’s website, YouTube and Facebook channels.

This year’s edition included a new category called The Responsible Innovation Award. The award recognizes a fragrance initiative that demonstrates excellence in the area of sustainability. Along with the The Fragrance Foundation France’s partner, insurance company Generali, a jury of eight experts in the field of CSR determined the winner according to 50 different criteria. The jury, chaired by Elise Ginioux, director of communication, corporate social responsibility and public affairs of Generali France, deliberated and chose the winner.

Once again, BW Confidential teamed up with the Fragrance Foundation France to produce a special edition magazine featuring the winners and a special report on the fragrance market in France. To read the special edition, click here.

A total of 13 prizes were awarded:

Professional Awards (voted on by the industry)