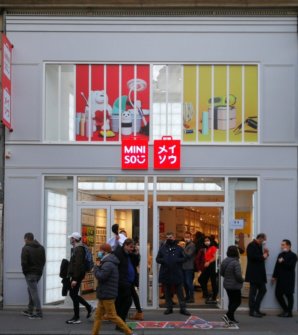 Chinese variety store chain Miniso has opened its first store in France. The 260m2 (2,798.62ft2) Paris store, which is located a stone’s throw from French department stores Galeries Lafayette and Printemps, opened on October 20. The retailer will also launch an online shop soon. The company plans to open two more stores in France this year and additional doors in 2021.

Miniso is positioned as a Japanese-inspired lifestyle company and sells around 2,000 low-cost household and consumer goods, including beauty and personal-care products. More than 80% of its products are under €10.

Miniso, which is headquartered in Guangzhou, China, opened its first store in China in 2013 and now has 4,200 stores across 80 countries, including the US, the UK, Canada, Australia, Spain, UAE, India and Mexico. The company listed on the New York stock exchange last week.