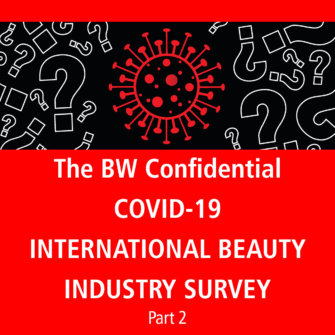 BW Confidential sought to find out how beauty will perform over the weeks and months ahead as many countries begin to lift lockdown measures and re-open stores.

We asked industry executives how they see the impact on sales both online and in brick-and -mortar stores and what they view as the key challenges as stores begin to re-open.

A total of 392 executives responded to our COVID-19 International Beauty Survey Part 2:  Emerging from the Lockdown, from the distribution (local market, online and travel retail), brand, and supplier (formulation and packagers) communities from the period April 27-May 3.

Almost half (49%) said that they expect the market to see a strong decline in sales for 2020. A majority (57%) also said that although stores will soon gradually re-open, it will take much longer than three months for sales to recover. Indeed, one of the key concerns among executive comments is how long it will take for the market to rebound, with most not seeing any bounce back before the end of the year. This is especially the case given how long it will take for the lockdown measures to be completely lifted and how most stores will be operating at a reduced capacity for the foreseeable future due to social-distancing recommendations.

While skincare is the category that is proving most resilient, there are many questions over fragrance. This is especially in terms of its performance in the last quarter of the year, which is critical for the category’s sales.

This survey follows our a poll conducted from March 19-24 to find out out how the industry is dealing with the crisis and executives’ plans in terms of cuts in personnel, marketing and a possible investment in digital.

Below are the key findings of the survey:

A total of 392 industry executives responded to the survey from April 27-May 3, 2020. BW Confidential would like to thank all those who took part in the survey.

Other data
Heard on the net
Most read