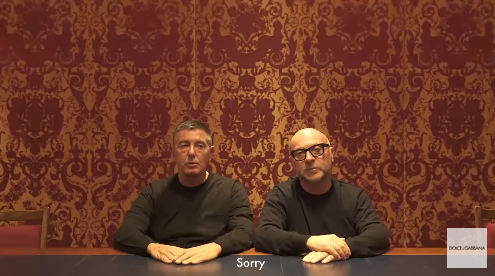 Italian fashion house Dolce & Gabbana’s founders have issued an apology to Chinese consumers via a video posted on Chinese social media platform Weibo. The statement follows a controversy-filled week for the brand, sparked by an advertising campaign deemed as racially insensitive by the Chinese.

Following the controversy, online retailers including Suning.com, Taobao, JD.com and Yoox Net-a-Porter have reportedly removed the brand’s products from their sites.

In the video apology, D&G’s Domenico Dolce and Stefano Gabbana sit side-by-side talking to the camera in Italian. “Our families always taught us to respect different cultures across the world and because of this we want to ask for your forgiveness if we have made mistakes in interpreting yours,” says Dolce. The video closes with the pair saying “sorry” in Mandarin.

Earlier in the week, D&G posted a written apology on Weibo, after the brand cancelled its upcoming Shanghai fashion show following backlash from the controversy.

The videos at the origin of the controversy, posted on the brand’s Instagram account, depict an Asian model clad in D&G who is trying to eat traditional Italian dishes such as Spaghetti Bolognese and Cannoli with chopsticks.