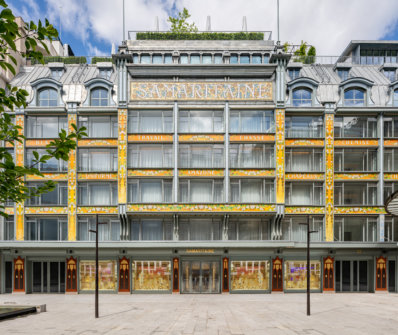 Paris department store La Samaritaine is celebrating its 150th anniversary with a string of events, collaborations, pop-ups and performances, running from September 2 to October 31.

The store, which is operated by LVMH-owned travel retailer DFS Group, re-opened in June after having been closed for 16 years. La Samaritaine, which was founded in 1870, is celebrating its 150th anniversary this year after what it calls a year-long delay caused by the pandemic.

On September 2 the store unveiled window displays. On the store’s rue de Rivoli side, the windows feature multicolored neon displays. Meanwhile, on the Pont Neuf side, new light installations are part of an exclusive collaboration with Prada.

Inside the shop, the Prada Glow installation features a 3D optical illusion displaying views of the set from Prada’s Fall/Winter 2021 fashion show, accented with neon lights.

Throughout the two-month celebration, every weekend a troupe of artists will highlight La Samaritaine’s  advertisements from the past. This includes burlesque acts from performers dressed as peacocks, town-criers and balloon-girls, among others.

Meanwhile, artist Elsa Muse designed a cake on an animation device, a zoetrope. The device creates the illusion of motion by showing a sequence of drawings or photographs showing progressive phases of that motion. The cake slowly turns and tells the store’s history through sugar figurines. The figurines include the department store’s yellow shopping bags and sales staff, among other figures. The top of the cake features La Samaritaine founders Ernest and Marie-Louise Cognacq-Jaÿ. Edible versions of the cake are available on Saturday at 4pm.

Chefs Matthias Giroud from the Voyage restaurant and bar and Jérémy Del Val from Maison Dalloyau will also unveil a box set of cocktails and “haute couture pastry” for the anniversary.

Lastly, the department store’s Loulou Boutique features a wheel of fortune where shoppers have the chance to win free gifts.