Sixteen years after it closed its doors, the newly renovated Paris department store La Samaritaine was inaugurated today during a ceremony attended by French president Emmanuel Macron, Paris Mayor Anne Hidalgo and Bernard Arnault, Chairman and CEO of LVMH, which owns the store. 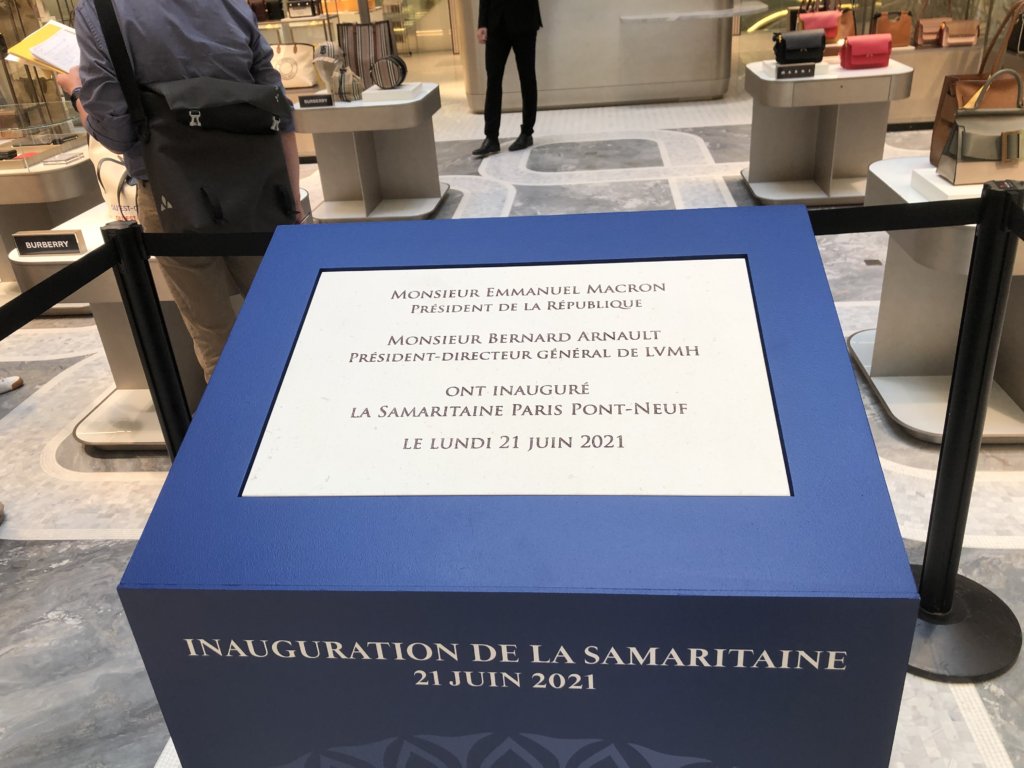 “Our ambition was to create a place of experience, of life and of discovery,” she said, adding that the store is intended to draw Parisians and the French, as well as international travelers.

“This is the biggest concept store in the world with 600 brands and 400 exclusive products. This includes the big-name luxury brands, as well as a multitude of small, niche and French brands.”

“We like to say that La Samaritaine is the smallest department store and the biggest concept store.”

Asked about whether La Samaritaine would keep its old tagline of ‘You can find everything at Samaritaine’, she said that the slogan has been adapted to today’s consumers’ expectations with a focus on a curated assortment and that it is now more about: ‘You can find all of Paris at La Samaritaine.’

In line with this focus on curation, the store is also home to two concept stores, Loulou and Rivoli focusing on a mix of hard-to-find brands and original products and including accessibly priced items. The Loulou concept store also highlights made-in-France brands and features the La Samaritaine own brand, which is inspired by chapters of the department store’s history.

In a bid to showcase French gastronomy, La Samaritaine features 12 restaurants, which are located in key areas around the store (rather than hidden at the back of various departments, the company points out) in a bid to punctuate the shopping trip and underline the ‘experience’ element of visiting the store.

LVMH executives declined to share forecasts on sales targets, but admitted that with the current Covid context, building the business will take time.

“It is complicated to predict sales, especially for the next year. Consumers are no longer in the habit of coming to La Samaritaine [given its long-term closure], so it will take a certain amount of time” said La Samaritaine Chairman and CEO Jean-Jacques Guiony.

De Boysson added: “We are very ambitious for the future, but it will take a little time. We think that we will have traffic of around five million [per year] in the next three to four years.”

Guiony pointed out, however, that the fact that the complex is a mixed-use space would drive traffic. The buildings span a total of 70,000m2, and in addition to the department store include a five-star hotel Cheval Blanc, housing and office space.

Commenting on the decision to opt for a mixed space project, Guiony said: “When the store closed 16 years ago the clientele for this type of store had disappeared, so we could not open a store based on that same formula and covering 80,000m2; there was a necessity to have a mixed-use area.”

He added that the living space, offices, restaurant and hotel would bring some ‘animation’ to the retail area.

A big vision for beauty

The space is located in the basement area of the store and brand expression is given pride of place – through shop-in-shops and branded corners featuring prominent logos.

The beauty area houses 200 brands. These include prestige names, such as Dior, Chanel and Guerlain in a luxury setting complete with parquet flooring, gilded brass structures and mosaics. Meanwhile, the Pure Beauty area for example,  features trend-focused companies, such as Aesop, The Ordinary and Le Labo in an urban atmosphere with waxed concrete, metallic furniture and wood.

The beauty space is divided into five main areas:

-The Pure Beauty Space, covering 80m2 is dedicated to beauty featuring responsible formulas and packaging. There are around 40 brands in this area, including L:A Bruket and Dermalogica.

-The Makeup Bar at the center of the beauty space, which features a large table to test products.

-The House of Perfume, which is described as a multi-brand and luxury space with prices ranging from €3,000 to €300,000. It showcases fragrances presented under large glass bells, as well as La Haute Parfumerie de Guerlain and rare scents from Bulgari and Chanel. Consumers can also avail of a bottle engraving service.

-The Samaritaine Beauty Studio, a 165m2 space, which is described as the new Parisian temple of clean beauty. Nail company Kure Bazaar provides manicures and pedicures, while there are hairstyling services from hairdressers who will be in store on a rotating basis. Canadian company Theio Vitality also offers a hair analysis service.

– The Cinq Mondes spa. This 400m2 spa is home to seven treatment rooms and includes a hammam and a scrub room.

DFS will also launch a new website for the store.

Samaritaine Paris Pont-Neuf by DFS will be fully operational from June 23, after a delay of more than a year caused by the pandemic.