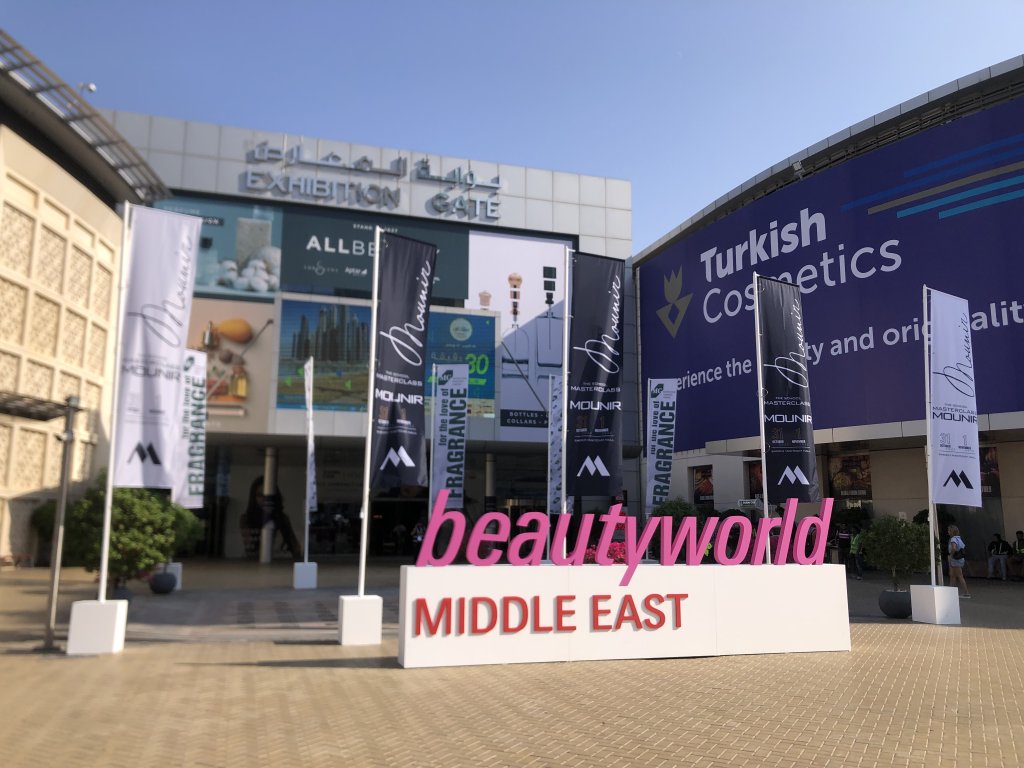 BW Confidential reports on key talking points and the innovations presented at the Beautyworld Middle East show, which took place in Dubai from October 31 to November 2

The Middle East beauty market has bounced back from Covid, and the recovery was much in evidence at the key trade show for the region, Beautyworld Middle East, held at the end of October in Dubai. This year’s show was 60% larger than the 2021 edition, and fragrance was once again a key sector at the event, with 180 companies from the fragrance industry exhibiting.

The region’s largest market, Saudi Arabia, is driving growth for beauty. “Saudi Arabia is clearly, for us, the biggest market in the region; it is our main focus,” Firmenich Perfumery Middle East and Africa Regional Director Alex Dhina said.

The Saudi government’s Vision 2030 program to modernize the economy has encouraged locals to seek work, which has increased their disposable income and spend in the country. Also, with women now able to be more active (they can now drive and work) in the country, the consumer base has grown. In addition, more consumers are also purchasing locally, rather than abroad.

Givaudan SAMEA Fine Fragrance Director Danielle Hokayem adds that many local Saudi companies are now exporting more to markets such as Europe, Africa, Indonesia and Malaysia, a trend that has accelerated over the past two years.  “Consumers in other parts of the world are interested to know about products from the Middle East,” she commented.

“Online has clearly grown a lot and will continue to grow because Middle Eastern consumers are young and very connected. They have different habits compared to their parents. There is no denying that [brick-and-mortar] retail is important, but online is major,” explains Hokayem.

However, as in other regions, rising costs of raw materials, supply-chain issues and inflation are major challenges, and were key talking points at the trade show. Most fragrance houses have sought to build stock to ensure that they can supply clients.

“About 18 months ago we forecast this situation and spent $15m [globally] in a short time to buy strategic stock to have in our local factories to deliver to our clients on time and protect them. It has served us well,” commented UK-based CPL Aromas CEO Chris Pickthall. CPL Aromas has operated its factory in Dubai since 2012, which Pickthall says allows the company to deliver products to regional clients within a few days.

Firmenich too has looked to focus on better forecasting. “We do a more accurate forecast for the customer and ask them to give us their forecasts in advance – at least for the next six months. They also understand that we need certain visibility to make sure materials are available,” Dhina comments.

Symrise meanwhile, says that its strategy of backward integration has served it well during the supply-chain crisis. “Inflation, transportation, energy costs, raw material impacts–we have so many elements that are putting a lot of pressure on the supply chain,” Omori said. “Our strategy is the same as the last 10 years – year by year we integrate more ingredients into our supply chain. The supply chain is a big issue today and, so far, we are delivering 100% of all the orders.”

Givaudan emphasized that its global footprint allows it to manoeuvre and adapt. The company’s size also means that it is on the priority list of many suppliers, which helps it secure raw materials.

Eurofragance CEO Laurent Mercier claims raw material prices have gone up by 20% compared to the same period the year prior (October/November 2021). He added that the fragrance industry is competing with other sectors for materials. “When other industries return to normal, we struggle as a small industry. For example, some of our starting raw materials or feedstock is shared with vitamins, which means that we are in competition with many industries,” he stated.

However, there have been some improvements on the logistics front.  “What I see in the Middle East and North Africa, is that [logistics] are still struggling a bit, but we are no longer in a situation where you cannot find containers or you do not get the routing for shipments,” Dhina commented. “So there has been improvement from this side. It is not perfect, but it has improved since the beginning of the year.

German flavor and fragrance company Symrise highlighted several initiatives in the area of naturals and sustainability. The company showcased its recently relaunched naturals fragrance house Maison Lautier, which consists of three lines: The Artisan Range, the Madagascar Range and the Supernature Range. The Artisan Range features traditional fragrance ingredients, such as rose, produced in Grasse, where Symrise recently opened a new factory. The Madagascar Range consists of ingredients from a project of 200 hectares of land in Madagascar, where Maison Lautier produces 40 ingredients. Lastly, the Supernature Range includes ingredients that are new for the industry, such as vegetables and fruits.

Symrise also highlighted a new version of its AI-powered fragrance tool Philyra, which the company first unveiled at the World Perfumery Congress (WPC) in Miami in July. The new iteration, called Phylira 2.0, allows perfumers are able to create scents that contain renewable and readily biodegradable fragrance components. Symrise also revealed that it opened a new office for fine fragrance in Shanghai. The company aims to highlight Maison Lautier in Shanghai, China in 2023.

Switzerland-based Firmenich highlighted fragrances created by perfumers based in the Middle East region. The fragrances presented were described as long-lasting and featured Firmenich captives. One of the scents was called Deep Oud, created by Firmenich Principal Perfumer Hamid Merati-Kashani. Merati-Kashani also pointed out that while in the past Middle Eastern consumers were interested in oud and heavy notes, they are now gravitating to French fragrance notes such as rose. He added that there is no longer a distinction between men’s and women’s fragrances and unisex scents dominate. For example, men are interested in vanilla notes, in addition to other sweet, dessert-like notes, such as praline and caramel.

The company also highlighted its partnership with AI-powered platform O My Note, which offers personalized fragrance recommendations. On the O My Note platform, users can enter information regarding an idea for a new fragrance (in video, audio or text format). The tool suggests a list of fragrance ingredients, asks the user to choose three and then generates a recommendation. CPL Aromas is also set to introduce a wellbeing concept with fragrances that have relaxing or calming properties.

Swiss flavor and fragrance house Givaudan’s Fine Fragrance, Consumer Products and Active Beauty divisions worked together for the first time to create fragrances that pay homage to three elements that represent the region: Waves, dunes and leaves. One of the fragrances created, Suspended Reflection, was inspired by the Dead Sea and featured salty sea breeze scents and zesty notes from Jordan Valley citrus trees and mineral-rich and earthy notes.

Spain-based Iberchem partnered with local artist Sonu Sultania to highlight the connection between painting and fragrance. Sultania was presented with scents at Iberchem’s stand and created a painting at the booth based on the fragrances. The company said the initiative allowed the company to explore new and different ways of finding fragrance inspiration.

Spain-based fragrance house Eurofragance presented a concept aimed at highlighting fragrance and local emerging artists. Called ArtLab Gallery, the concept saw five perfumers work with five local female artists. Each artist created an artwork, the perfumer created a scent and the artwork and the scent were then paired together under one name as one piece of work. The five female artists are currently studying art or graphic design in the UAE and are between 17 and 21 years old. ArtLab Gallery aimed to highlight these local female talents.

Eurofragance’s stand, which featured white walls and wood pillars, meant to mimic an art gallery setting to highlight the creations. Visitors were invited to contemplate the artworks, which included sculptures and photography, while sampling the fragrances. Each scent was presented in a fine fragrance format, in addition to other applications, such as a hair mist, an air freshener spray, a reed diffuser, bakhoor and a scented candle.

Japanese fragrance company Takasago highlighted its sustainable fine fragrance capabilities. Takasago perfumers created 12 fine fragrances that consisted of between 83% and 97% natural-origin ingredients. For example, Bergamote Outrenoir, created by perfumer Jacob Varela, contained 92% natural-origin ingredients and was described as a spicy wood. The Japanese company also highlighted 12 beauty care scents, also with a focus on sustainability. For example, 100% Friendly, by perfumer Tanja Schumacher, is 100% biodegradable and 100% renewable. It includes notes of lavandin, eucalyptus and pine needles combined with a woody accord consisting of patchouli, cedar and labdanum. Beauty care creations can be used in skincare, body care and haircare, in addition to fine fragrance.

The awards recognized innovation in 13 categories, covering fragrance, make-up, skincare, haircare, beauty tech and marketing campaigns. Some 59 finalists were shortlisted for the awards after receiving 150 entries.

Around 400 beauty and fragrance industry executives attended the awards gala dinner and ceremony.

The ceremony also honored Symrise Perfumer Maurice Roucel, who received the Lifetime Achievement Award. Roucel has worked in the fragrance industry for 50 years.

BW Confidential was media sponsor of the trade show’s awards, and also took part in the jury to select the award winners.

Cult Classic of the Decade: Luna 3 by Foreo

Perfumer of the Year: Dalia Izem from Givaudan