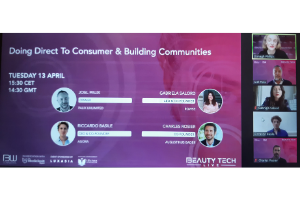 Finding the balance between content, commerce and community is perhaps the biggest challenge for brands when building direct-to-consumer (DTC) businesses, attendees at Beauty Tech Live’s “Doing Direct to Consumer and Building Communities” session in the Knowledge Hub heard today.

The webinar was moderated by Palix Unlimited owner Joel Palix, who noted there was not a “one size fits all” strategy that summed up the success of indie brands in recent years.

“I see two major issues for indie brands: One, how to find the right balance between commerce, content and community—this particularly [is] important when you want to international,” commented Palix. “The second issue, whether or not [to] and how to transition besides DTC into other channels.”

Skincare brand Augustinus Bader co-founder Charles Rosier told the panel that the brand began developing its community by partnering with Hollywood A-listers—some of whom became early shareholders in the brand—to develop brand awareness and generate curiosity among journalists.

“The second round of influencers were the journalists themselves,” commented Rosier. He said the brand’s story and credibility of Augustinus Bader in stem cell science triggered curiosity in the journalist community to try the product. Journalists recounting their experiences with the product was significant in driving awareness for the brand. “Obviously, with journalists like influencers, one of the issues nowadays is that they receive 200 products to use and therefore the trick is really to get them to actually try the products and not offer it to a cousin.”

Rosier said the brand took the view that all channels are useful for building brand awareness and decided to begin distribution in physical retail after realizing DTC alone would not get the brand to the speed of growth it was targeting.

“Stores are very useful for brand awareness,” commented Rosier. “When you request a certain investment, a certain price to consumers, they need to understand the reason why, they need to understand the story behind the brand […] and that explanation is very hard to get through one Instagram post, or a celebrity post or a quick endorsement. We are looking for that opportunity to explain our story and if there are other channels that allow you to have five minutes of attention to explain the story, that’s very useful.”

Beauty community app Agora founder and ceo Riccardo Basile said the platform had organically grown a 150,000 user community which it plans to triple by the end of the year. The platform has been built on a base of community and content sharing, before moving into commerce with the sale of beauty boxes. Livestreaming is set to begin next week and the launch of a beauty marketplace later in the year. Basile said the platform used gamification to incentivize users to upload content, and an ambassador program using smaller Instagram and TikTok influencers with under 100,000 followers to attract users.

Asked how Agora nourishes its community, Basile said: “In our case it is more the community that has shaped itself, the majority of the traffic and the new users come from the community. So, the community takes the direction that we don’t really want to control. What is interesting is that we have more than 100,000 pieces of content on the app and the distribution of the brands which are mentioned is very different to what you would have imagined.”

Natural skincare band Rowse ceo and co-founder Gabriela Salord told the panel the brand had deliberately decided not to use paid advertising to help it build its community in the early stages. She said cross collaborations with local artists and artisans had proven a win-win strategy for both parties in generating awareness.

In order to differentiate from other indie brands, Salord said: “Rowse consciously decided it wanted to play with the cool kids first; we don’t want to go mainstream right away because we feel that to be a very unique and authentic brand, for the first year, you need to be a secret brand that only cool people will talk about, only they get to try it, and then it takes off. We have collaborations with content creators, a very curated people, we don’t want any mainstream profiles.”